Annual “March Against Hate”, which is held each year in memoriam of Nikolay Girenko, an expert on nationalism and xenophobia and human rights defender murdered by the Nazis in 2004, took place in Saint Petersburg on November 2. About 150-200 persons participated in it. This year the main slogan of the march was “Russia without pogroms”. Participants of the march expressed their negative attitude to the events in the Moscow district of Biryulevo, where a pogrom against immigrants working at a local market happened in October this year. The march ended with a rally on Andrey Sakharov square. 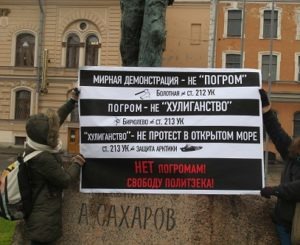