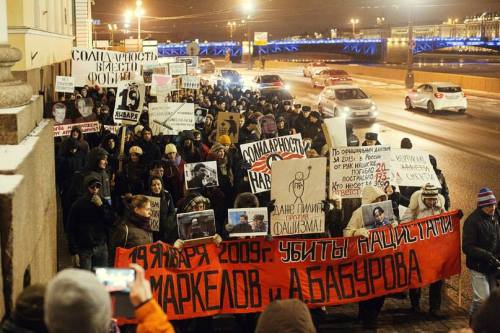 On January 19, 2015 the first ever march to commemorate Stanislav Markelov and Anastasia Baburova was held through the streets of Saint Petersburg. Human rights defenders and activists awaited this for 5 years, during which they had to go through repeated refusals by the city authorities to grant permission for a march, as well as a series of lawsuits, including the last one, considered by the Constitutional Court of the Russian Federation, in order to be able to pay proper tribute to murdered antifascists and continue their struggle against hate and fear.

Organizers of the march have also spoken about the difficulties they had faced when trying to get authorization for manifestation at a press conference, that was held earlier on the same day: “Reclaiming freedom by millimeter: How human rights defenders and activists defended their right to demonstrate on January 19th”.

At the press conference lawyers gave a summary of the long history of several years of refusals by the city administration to authorize manifestation in Saint Petersburg on January 19, which had led to numerous legal claims and a final appeal to the Constitutional court. Smolny district court and Saint Petersburg city courts had refused to positively resolve legal claims made by the march organizers, referring to the problem with the time, necessary for legalizing the demonstration. (Authorization for holding a demonstration should be requested from city authorities not earlier than 15 days before the planned event, but not later than 10 days before it, while the first decade of January is holiday time in Russia and all offices are closed.) But the human rights defenders, who had initiated a lawsuit, claimed that public holidays could not be used an excuse for non-fulfillment of the right to peaceful assembly, guaranteed by Article 31 of the Russian Constitution.

The claimant stated at the press conference that her claim “had been based on assumption that any requirements, established by the lawmakers, should be feasible and well grounded, while choosing the date, place and the form of an assembly should be left to the organizers”.

In its statement adopted on May 13, 2014, Constitutional Court of the Russian Federation confirmed that a violation of the right of citizens for peaceful assembly had taken place and ruled in favor of the claimant. The court stated that Article 7 Section 1 of the federal law “On public assembly” was in contradiction to the Constitution and thus the lawmakers should introduce necessary changes aimed at guaranteeing the possibility of applying for an authorization for public assembly if the general order of application for authorization was impossible to observe due to public holidays. The court stated that in this case application for an assembly could be made on the last day before the public holidays.

Constitutional court also stressed that the choice of place, date and form of the assembly should be left to the organizers, while the state authorities could influence it only through reaching an agreement with the latter. While requesting permission for a march on January 19, 2015 the organizer referred to this decision of the Constitutional Court. City administration agreed to grant permission for an assembly, but in its turn expressed various other disagreements (not related to the dates public holidays), which looked like they were seeking another pretext not to grant permission.

The organizer of the march shared her story about the kind of New Year holidays she went through in order to get required permission: she filed application for a march on December 31, 2014, but already on January 2, 2015 she was called to pay a visit to the city Committee on law and public order, which was then followed by two other requests for a visit to city administration (it turned out that on January 4 and even on January 7, the date of Orthodox Christmas, the officials were working this year!). Officials refused to authorize several routes for the march through the city centre referring to Orthodox religious ceremonies, repairs of street pavements, public celebrations and the like. Each time they proposed the only place for a public assembly – Polyustrovo park – which was not suitable for a march at all. It was only on the evening of January 15 that the organizers finally managed to get authorization for a march through Vasilyevsky island (“reaching an agreement” with the city authorities took two weeks!).