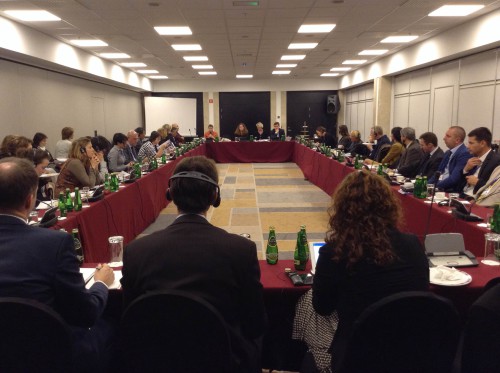 ADC Memorial’s side event “Foreign National Detention Centers and the Failure to Comply with EHCR Rulings on the Protection of Migrant Rights” was held on September 28, 2015 as part of the work of ODIHR OSCE.

Over 40 people, including official representatives of the governments of Ukraine and Russia, attended this event. The presentations were followed by lively discussions.

ADC Memorial experts presented a report on the violation of human rights in Russian Special Institutions for the Temporary Detention of Foreign Nationals (SITDFN) based on materials from the ECHR ruling in the case of Kim v. Russia and other cases that the group has been involved with. The topic of detention centers is important not just for Russia, since migrants are deemed “illegal” in many countries, and the unacceptable conditions of their detention remain an unresolved problem. One ADC Memorial expert stated that “Detention conditions in Russian SITDFNs are often inhuman and degrading, which was recognized by the ECHR.” In the key ruling in the case of Kim v. Russia, the ECHR noted violations of articles 3 and 5 of the European Convention. The Court obligated Russia to take general measures to establish regular judicial control over detention periods and improve detention conditions for prisoners in these centers.

The attorney Olga Tseytlina analyzed the systemic problem of the violation of the rights of stateless persons. She focused on extended detention periods for stateless persons and the lack of grounds for their detention in a SITDFN: “Detention for an extended period that is not controlled by a court is a gross violation of the rights of the prisoner, and neither the prisoner himself nor his attorney can appeal this.” Stateless persons must be immediately released from SITDFNs, provided with documents legalizing their presence in their country of stay, and assisted with filing for temporary asylum or refugee status.

The attorney Yuri Servov looked at the problems of refugees held in SITDFNs and the practice of denying refugee status to Ukrainians forced to remain in Russia due to the war in Eastern Ukraine. He stressed that, given the absence of the necessary legislative norms, prisoners in SITDFNs must be released “manually” and that each case takes at best several months. Ukrainian citizens prosecuted for violating migration rules are deported to their country of origin, and even though they face danger and ongoing military actions there and have lost their families and property, courts do not always take the political situation and personal circumstances into account.

One year of persecution against ADC “Memorial”: results and prospects

Violation of the Rights of Indigenous Peoples Resulting from Coal Mining Operations in Southern Siberia: a new report of ADC Memorial

Kyrgyzstan: ADC Memorial and Bir Duino targeted after alternative report to the UN