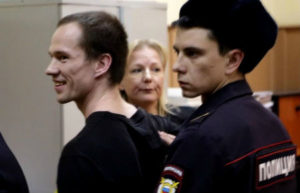 FIDH and its member organisation “Anti-Discrimination Centre Memorial” strongly condemn the sentence of Russian human rights activist Ildar Dadin to three years in closed detention facility for merely expressing his views. Ildar Dadin is famous for organising stand-alone protests holding banners with inscriptions criticizing Russia’s government policies. In a blatant violation of the right to peaceful assembly, Ildar Dadin is the first activist to be handed down a heavy sentence under the new anti-protest legislation.

On 7 December 2015, the Basmanny Court in Moscow convicted Ildar Dadin of violating Art. 212.1 of the Criminal Code for taking part in an unsanctioned group protest disapproving Russia’s involvement in civil unrest in Ukraine and for four unauthorized single-person pickets between August 2014 and January 2015. The judge Natalya Dudar handed down an even heavier sentence than requested by the prosecutor, who demanded a 2-year term of deprivation of liberty. Ildar Dadin’s supporters, present in the courtroom, were violently beaten by police officers for protesting the verdict.

Beside Ildar Dadin, who was placed under house arrest since January 2015, two other activists are currently charged with violation of the article 212.1 of the Criminal Code. In a trial against 75 year old activist Vladimir Ionov, the prosecutor demanded a three-year suspended prison sentence for repeated violation of rules regulating the organisation of protests, including the stand-alone protest with a banner “Je suis Charlie” and a picket in support of Nadezhda Savchenko. If convicted, he also faces a ban from public gatherings – a penalty absent from the Criminal Code. Vladimir Ionov’s final hearing was supposed to take place on 10 December. Following his hospitalization the same day, the hearing was rescheduled to 16 December. Diagnosed with unstable angina, Vladimir Ionov is in need of urgent medical treatment and is currently in reanimation.

Another political rights activist Mark Galperin faces prosecution under article 212.1 and risks up to five years of deprivation of liberty for several unsanctioned stand-alone meetings, among them the one in support of the Charlie Hebdo magazine and against Russia’s engagement in Ukraine.

“The international community must finally give a firm response to such shameless human rights violations as imprisonment of peaceful activists holding banners in protest of Russian policy”, -declared FIDH President Karim Lahidji.

Ildar Dadin’s activism is well known in Russia and in Ukraine. An active election monitor, he has given relentless support to Ukraine’s unity and to Euromaïdan, and participated in the Maïdan protests in Kiev. He was also active in defending LGBTI? rights and supported the defendants of the “Bolotnaya case”. He was arrested several times since June 2014 when he was taken into custody for holding a banner “Putin is Russia’s shame”. Dadin was beaten and ill-treated during the arrests, yet police officers responsible for torture and ill-treatment were not brought to justice.

In July 2014, the Russian Parliament adopted amendments to the Law on Public Assembly that penalize the participation in or the organisation of “unauthorized public gatherings, rallies, demonstrations, marches, or pickets” with heavy fines and administrative detention up to one month. In addition, the same year, legislators added a new article 212.1 to the Criminal Code that penalizes unauthorized public assemblies with a five-year deprivation of liberty if a transgressor commits three administrative offenses within a period of six months. International and local human rights organisations have relentlessly condemned the new amendments as contrary to the Russian Constitution and international law.

The Simplest Way to “Formalize”

Tolerance Versus Fear and Exclusion