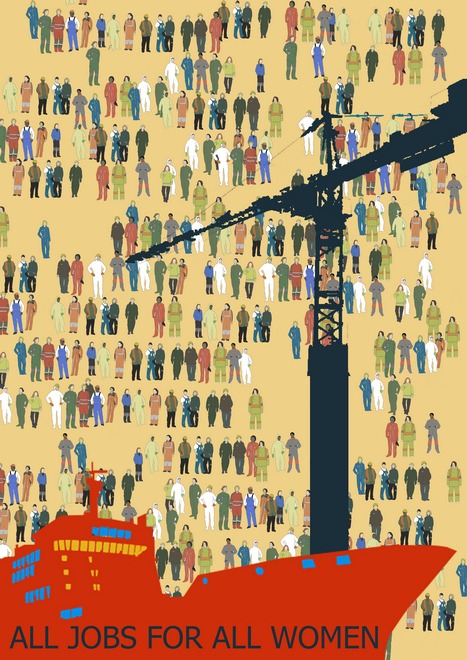 Women must be granted equal access to all types of activities and work, professional fulfillment, and good pay.

All women have the right to good jobs corresponding to their qualifications, education, interests, and life plans. Restrictions concerning appearance, age, and “beauty” are as inappropriate in most professions as gender bans (exceptions are modeling and some forms of advertising). For example, the requirement that only slim young beauties can be hired as flight attendants on passenger planes is the same kind of stereotype as the notion that a woman’s duty is to give birth and not work on a ship or in the metro.

Many countries still have similar patriarchal views of the “suitability” of women, when a candidate’s external features are considered more important than her professional qualities (whether there’s a requirement for external “beauty” and “style,” or, on the contrary, if a stylish appearance is seen as interfering with work).

The #AllJobs4AllWomen campaign was officially launched on March 8, 2017.

On August 25, 2017 amendments to Moldova’s Labor Code entered into force. The article concerning the list of banned professions was removed from the Labor Code. Superfluous professional restrictions for all women have been replaced with protective measures for pregnant women and new and nursing mothers, including temporary transfers to lighter jobs with retention of average earnings.

A resolution issued by Ukraine’s Cabinet of Ministers took effect on December 22, 2017. This resolution revoked Health Ministry decree No. 256 of December 14, 1993, which contained a list of 450 professions banned for women, with the exception of Chapter 3 – mining work. This chapter will be revoked after Ukraine denounces ILO Convention No. 45, which bans women from underground work in any type of mine. Articles 175 and 176, which envisage restrictions on women working during the night hours or when they are pregnant or have children under the age of three, remain in force in the Labor Code.

On May 1, 2019, Uzbekistan’s cancelled list of sectors and professions banned for women was reframed as a set of recommendations, thus keeping women out of “unadvisable” professions. In March 2022, UN CEDAW recommended that Uzbekistan review this list; make it easier for women to access these professions; and ensure that any restrictions are reasonable and are applied only in specific cases and not indiscriminately to all women.

On August 14, 2019, Russia’s Justice Ministry removed approximately 100 professions from the list; these changes entered into force on January 1, 2021. The list is still being shortened: Beginning March 1, 2022, an order of Russia’s Ministry of Labor and Social Protection removed the positions of mechanic (technician) for airframe and propulsion, for instruments and electrical equipment, for radio equipment and for parachutes and life-saving equipment; aircraft technician for fuels and lubricants; wing technician; and airplane (helicopter) maintenance technician from the list.

On October 12, 2021, the Kazakh president signed amendments to the Labor Code resulting in the repeal of the list of professions banned for women; Article 16 still lists maximum weights that women can lift and move by hand.

In November 2021, members of the Kyrgyz state delegation attending the 80th session of CEDAW expressed their readiness to overhaul the country’s restrictive approach to women’s work and made gender equality a priority in terms of state labor policy.

June 2022. Government agencies in Azerbaijan and Belarus announced that they would be shortening their lists of banned professions (from 678 to 241 in Azerbaijan, and from 181 to 90 in Belarus). Jobs that no longer pose a threat to women’s reproductive health due to technological developments were removed from the lists.

December 2022. A bill revoking all restrictions on jobs for women was submitted to Russia’s State Duma with the recommendation that it be reviewed during the Duma’s spring session.