“Old man Le Pen came to Russia. Some people suspect he has some business here, but he said he came to visit friends.
Back in the Soviet days Kremlin hated his guts, calling him almost a fascist. But the world has changed. Russia is different now”.
Dmitry Kiselyov, TV presenter, November 2, 2014

On a sad November day an odious TV presenter has announced a kind of a ruling to Russia that had changed. He was talking on the eve of a strange holiday (November 4, the Day of national unity in Russia) when almost a hundred thousand Russian citizens marched through the streets of Moscow with slogans, which could hardly be described other than fascist… Fascism can be described by a set of characteristics – cult of a leader, militarization of public consciousness, aggressive xenophobia, mad search of internal and external enemies, paranoid fear of an imaginary “threat”, the feeling of “national humiliation“.

Now, let’s have a look at the slogans and posters of the march through Tverskaya street in Moscow – without hesitation they used obscene wording (officially prohibited), the marchers scolded Ukraine and “the fifth column”, hailed Putin in a rather pornographic way, cultivated militarism and aggression, called to “take back and never give away” (somehow, they cared most about taiga, although it’s not clear who would want to take it), scared themselves with some terrible danger, which supposedly threatened our country, and pointed to all-pervasive enemies, who supposedly threatened our “unity”….

The danger is indeed here already – it is in the streets, on their faces, in the rotten souls and disintegrated minds. One fears not for those, whom these people scold and are afraid of, but for all the others.

But “Russian marches”, which already became traditional on November 4, are not so fearful anymore – old-style Nazis look really pale compared to the events organized by the state itself.

Just a couple of days before the “Russian march”, a march against hate took place in Saint Petersburg. It is being organized for 10 year now following the murder of Nikolay Girenko, an antifascist and ethnographer killed by the Nazis. Every year a few hundred people march through the streets and embankments of Saint Petersburg, past the Institute of ethnography, where Girenko used to work, the Academy of sciences, the main building of the Saint Petersburg University, past all the beautiful buildings of Russia’s northern capital, under the unimaginable storms of the local weather and the grey skies. People carry portraits of Nikolay Girenko, Stanislav Markelov, Anastasia Baburova, Timur Kacharava, Ivan Khutorskoy, Anna Politkovskaya, Galina Starovoytova, they carry democratic banners and antifascist flags.

Young and old marched together, with antifascist and rainbow-colored LGBT flags, as the journalists and “political opponents” photographed them. But each year the same people come to these marches. This year, too, young and old carried portraits of their murdered colleagues and friends, while the storm tried to tear away the posters and the flags.

The faces of those, who marched, were sadder than before – the terrible war tragedy, the feeling of personal responsibility for it pressed hard on these people, same as the heavy grey skies over their heads. Somebody carried a Ukrainian flag, somebody – a flag of Crimean Tatars. The front banner reads “Citizens, Motherland is in danger – our tanks are on a foreign land!” The end of the column was composed of the elderly people, who keep on making their own posters each year, most fearless ones, denouncing the lies, aggression and indifference. Old people with sticks, helping each other to march on. The last persons among the growing number of non-persons. 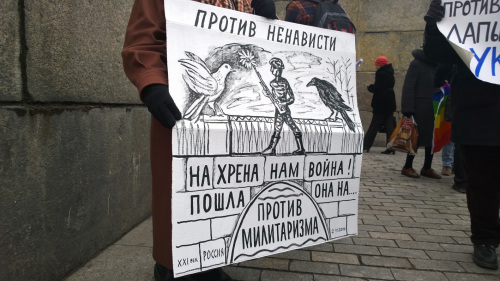 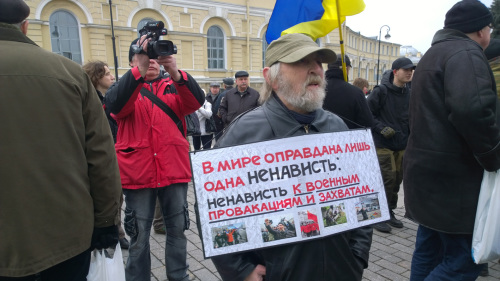 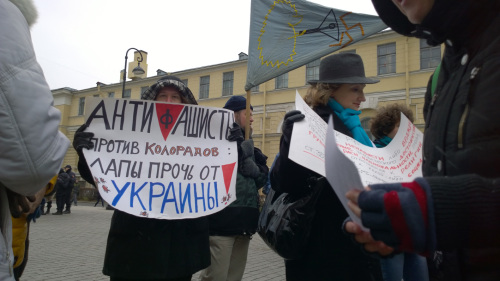 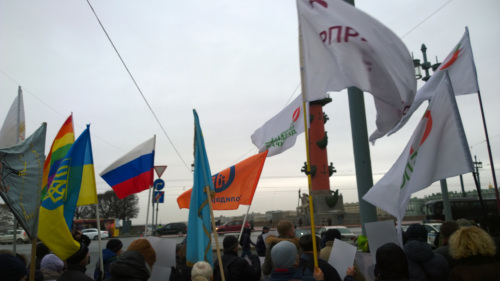 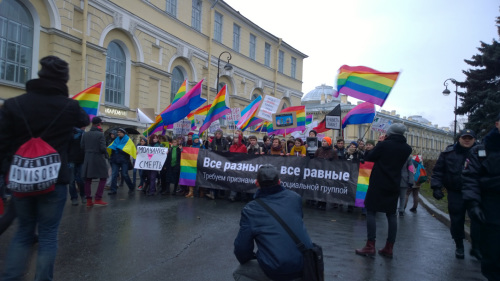