Precarious work, or agency labor, is a kind of “leasing” of workers: under these types of contract recruitment or employment agencies provide workers, who are officially employed by the employment agency, to other companies (in this case the workers enter into employment relationship with the employment agency, and ideally it is the latter that must ensure all social payments, compensations and benefits required by the labor legislation).

Agency labor market emerged in Russia in the early 2000s, and its heyday in large part was associated with the mass labor migration of workers from the former Soviet republics to Russia. Russia’s strict immigration laws, complicated registration procedures, poor knowledge of the Russian language and a short duration of employment in a foreign country forced migrants to seek the easiest paths of legalization and employment. Such opportunities were provided by intermediary companies, the so-called outsourcing companies, which flourished at that time and which dealt with the employment of the workforce and forwarding it to the enterprises, warehouses, shops, offices, which needed workers.

After realizing that most migrants did not have the knowledge of the Russian laws and were ready for any conditions of employment, such firms quickly started using “grey schemes” of employment, actually turning agency work into slave labor. For example, many intermediary companies, whose illegal activities were fought against by the staff of ADC “Memorial”, concluded fictitious contracts with the employees, which were not given to the employees themselves, and some companies did not even conclude any formal agreements at all. This was done intentionally, because in case of a conflict with an employee it was practically impossible to prove employment or contractual relationship with the company. Money for the work of migrant workers was transferred by the actual employers to the intermediary companies and workers tried to claim their salaries from the latter (it is not surprising that this was often to no effect because the lack of fixed contractual relationship gave vast possibilities for crimes). Compensation for periods of sickness, payments to the Social Insurance Fund and provision of vacations were not even discussed, on the contrary arbitrarily assigned penalties (such as fines for being late after a 15-minute lunch break or even for talking in their native language) were deducted from the salaries of workers instead. When registering a legal entity such intermediary companies declared only minimum amount of authorized capital, which in the case of litigation, obligations on payment of wages or seizure of property for debt guaranteed them minimal financial losses only and drove the responsibility for violation of labor laws to a minimum.

At the same time, the contracting party was freed from entering into a contract relation with the personnel and it was not necessary for it to enter into any direct contract with the workers, which removed responsibility before them. As the formal employment relationships between the company and the employee were absent, the factual employers often did not consider it necessary to respect the rights of workers in terms of occupational safety and health (a de facto 14-hour working day, work for seven days a week could have been introduced depending on the employer’s needs, without any respect for the rules regarding transfer of employees from one job to another, etc.).

Such a scheme for employment, which was “convenient” and “safe” both for the employer and the intermediary employment agency, not only provoked violation of the rights of foreign workers (and in fact was used for the purpose of such violations), but also prevented effective defense of the workers’ rights. On numerous requests of ADC “Memorial” the Labor Inspectorate responded that a deceived migrant worker had not concluded an agreement with the employer, and the supervisory authority did not take into account the fact that the lack of such an agreement was itself a violation of labor laws. To prove the actual employment relationship in court was also difficult, although wage arrears before the migrants amounted to huge sums of money. Since 2009, when ADC “Memorial” began to actively protect the rights of migrant workers, we have repeatedly raised this issue in the human rights reports, during the meetings with representatives of the Federal Migration Service and in all kinds of dealings with public authorities, but we basically failed to stop the illegal activities of intermediary companies.

Meanwhile, on January 1, 2016, amendments to several Russian laws (including the law № 116-FZ) came into force and a new article (Article 56.1) has been introduced into the Russian Labor Code, which implied that agency work “carried out by an employee by order of the employer for the benefit of, under the direction and control of the physical or legal person who is not the employer of the employee” was prohibited. Permission to “lease” workers in the form of temporary “provision of personnel” is authorized by the law only in strictly defined cases, for example, if it is necessary to temporarily replace an employee departing on maternity leave (with the obligatory signing of a labor contract with an employment agency, which should ensure payment of all social fees). Only those recruitment or private employment agencies, which went through obligatory licensing process are allowed to practice this scheme. Among the conditions for these agencies is a requirement to have a sizeable authorized capital and not to use simplified taxation schemes. The new legislation should, theoretically, stop the activities of intermediary firms that profit from migrant labor.

However, intermediary firms continue to work in the same way as they did before. Firstly, the procedure for the licensing of employment agencies has not been adequately defined. Secondly, as it turned out, the new law has a loophole, which allows to get around it: nothing is said about the prohibition of concluding a different type of contract in accordance with the civil law (on provision of paid services). It should also be said that in the past intermediary firms preferred to make civil contracts with migrant workers, as they sought to give workers as little opportunities as possible for protection of their rights. Because of this most of the outsourcing companies, which “leased” migrant workers, were not restricted in any way in their activities. And the companies, which earlier signed employment contracts, started to sign contracts on provision of services instead.

Control over the observance of the rights of migrant workers, “leased” by such companies, is difficult. By law, the organizations, which are involved with foreign employees, must report to the Federal Migration Service (FMS), giving a special notification indicating the employee’s patent number, his/her employment or civil contract, its duration and other important data. However, most employers (an estimated two-thirds in St. Petersburg) do not inform the FMS about their foreigner employees, and, apparently, this is of little concern for the supervisory bodies: in 2016 in St. Petersburg a total of about 200,000 work patents were issued, but the employers filed just 75,000 notifications to the FMS.

At a press conference on the occasion of the adoption of the law banning agency work, Andrey Isayev, the State Duma deputy, who had initiated its adoption, said that while preparing amendments to the law he and his colleagues had taken into account the rights and interests of all parties, but as one can see, the rights and the interests of the employers who use migrant labor force turned out to be more important than the workers’ rights. Thus, the idea to ban agency labor, at least in part which deals with illegal use of foreign workers, has failed. Migrant workers continue to be “leased”, while state control over observance of their rights is clearly insufficient. 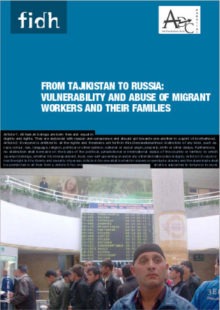