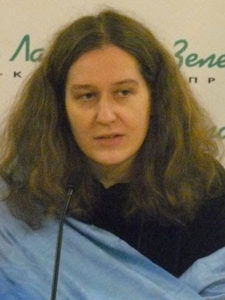 Stephania Koulaeva, a historian by education, explains the ever-expanding scope of her human rights work. Her interest was drawn to the memorial movement in Russia: ‘at first from a historical perspective, then from a human rights perspective.’ As a student, Stephania was involved in anti-fascist and anti-racist groups, primarily focused on the rights of the Roma minority, the most visible minority in Russia at the time. After new waves of migration began from Central Asia in the late nineties, Stephania expanded her work to issues surrounding migration. This then broadened further to include women’s rights, LGBTI rights, and she eventually became involved in the protection of human rights defenders. Her organisation, Anti-Discrimination Centre Memorial (ADC Memorial) is the only organisation in Russia that combats discrimination on such a wide range of issues.

Unfortunately, shrinking space for civil society has consistently been a serious threat within Russia.

‘In the 1990s and early 2000s, neo-nazis attacked and occasionally murdered human rights defenders working on discrimination issues. At that time that was the primary danger; the main danger we face now is political oppression by the Government.’

Over the past few years – particularly since Vladimir Putin’s 2012 return to presidency – the Russian Government has cracked down on NGOs, often by accusing them of being ‘foreign agents’ due to their ‘political activity’. ADC Memorial was forced to choose between officially registering as a ‘foreign agent’ or closing down for submitting a report to the UN Committee against Torture in the lead up to Russia’s 2012 review by that body. As the label of ‘foreign agent’ would greatly restrict the work ADC Memorial was able to carry out, it made the difficult decision of closing the organisation down in 2014. Since then, ADC Memorial has been operating without official Russian registration.

The continued operation of ADC Memorial does not indicate an alleviation in the Government’s harsh approach to civil society, and in November of this year, prominent NGO Memorial Human Rights Centre was targeted in the same manner:

‘They received a letter from the prosecutor stating that they had violated the Constitution of the Russian Federation for fulfilling their work.’

Memorial Human Rights Centre had previously ‘criticised Russian aggression in the Ukraine’ and ‘disagreed with the arrest of certain civil activists’. It is most likely being threatened due to this ‘political action’.

‘This is a very dangerous step for the Government to take. They are now criminalising human rights activity; the situation is rapidly getting worse.’

Stephania has a positive outlook on her previous interactions with the UN, acknowledging that the UN has done their utmost to stop the criminalisation of human rights defenders.

‘We’re very grateful for all the support that we’ve received from various treaty body committees that we’ve worked with; they’ve all recognised the work of civil society and given meaningful recommendations in the framework of their mandate.’

However, the political reality of the UN’s influence is not always as effective. ‘It’s very difficult to oppose Russian politics, even at the level of the United Nations.’

Stephania is now looking outward to bring domestic change to Russia, as anti-discrimination laws now seem ‘unlikely – although pressure on the Government will continue.’ She hopes to find some success in international courts, citing potentially useful precedents at the European Court of Human Rights in cases regarding migrants and stateless people.

‘We can’t simply stay within our borders – it’s impossible to tackle issues solely within Russia without also looking at related issues in neighbouring countries.’