Anti-Discrimination Centre “Memorial” welcomes the decision of the European Court for Human Rights (ECtHR) in the case of Filipp Kostenko and several other applicants.

On October 20, 2020, the European Court of Human Rights issued its decision in the case of “Shneyder and Others v. Russia” based on six legal complaints brought up by several peaceful demonstrators. The Court ruled that Russia had violated Articles 5, 6 and 11 of the European Convention on Human Rights.

The seven applicants had been detained for participating in peaceful demonstrations in Moscow and St. Petersburg, then convicted of administrative offenses and had received sentences ranging from fines of 500-1000 rubles to administrative arrests for a periods of 3-15 days.

The European Court considered that the measures applied to peaceful participants in public assemblies did not correspond to public needs and were unnecessary. Article 11 of the European Convention (the right to freedom of assembly and association) had been violated in respect of all the applicants, as the Russian courts had ruled it unlawful that some of the applicants had shouted slogans and/or had refused to stop participating in a public event that took place without prior notification to the authorities.

ECtHR found violations of Articles 5 and 6 of the Convention (right to liberty and security of person, right to a fair trial) in the cases of some of the applicants. In particular, this was true in the case of Filipp Kostenko, who had complained that the lawyer he had chosen had not been admitted to the court hearings of the first instance, and that the court of appeal later had modified the charges against him, while not giving the defense an opportunity to speak.

Yana Teplitskaya, one of the applicants in the case, has commented on the ECtHR’s decision:

“It seems to me that this case is interesting because there is nothing superfluous in it: at every stage, from drawing up police protocols to presenting a complaint to the ECtHR, I wrote about freedom of assembly, mentioning Article 11 [of the European Convention] and Article 31 [of the Russian Constitution]. And the public event itself [where people had been detained] was dedicated to freedom of assembly in its purest form. Perhaps, it is also important for me that after such a lengthy period of time since the case itself, it is possible to assess the changes that have occurred since then. Nine years ago everything was different, in many respects softer: the fines were 20, or even 200 times less than now, there was no article 212.1 of the Russian Criminal Code [multiple violation of the rules for organizing public assemblies], there was still no law on “foreign agents” and ADC “Memorial” had still operated in St. Petersburg. But the main shift has already happened: the police detained and the courts condemned [the activists] regardless of the European Convention and the [Russian] Constitution. Ten years later this has resulted in the reality in which we now live”.

Within three months Russia will have to pay the compensation to seven applicants, which was awarded by the Court in the amount of €5,000-10,000 for each claimant and also to reimburse the fines they had paid. 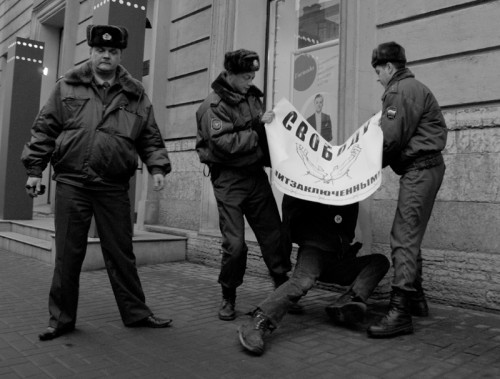 On December 6, 2011, during the mass protests against election fraud in St. Petersburg, among many others, a human rights defender and activist, an employee of the ADC “Memorial” Filipp Kostenko, was detained. The court sentenced him to the maximum possible punishment – 15 days of arrest, – and the court was obviously guided not by the idea of ​​the “gravity of the crime”, but by some legally dubious paper that “characterized the personality” of Filipp [Kostenko], the paper being presented to the court by the staff of the Centre for Combating Extremism [Centre “E”]. It has described various forms of protest activity, in which the activist participated. Philip immediately went on a hunger strike demanding the release of all the detained and arrested protesters. After 15 days, in October 2011, the officers of Center “E” initiated another administrative case on false charges of “obscene language in a public place”. Kostenko, exhausted by a hunger strike, was brought from the special detention center to the court, where he was again assigned a maximal arrest of 15 days. In fact, the judges simply extended the arrest at the order of the Centre “E”, which had direct interest in this.

While Filipp Kostenko was serving the second 15 days of administrative arrest, criminal prosecution mechanisms were used for his further imprisonment, and this was directly related to the activist’s participation in protest actions. An appeal was filed with the court by the prosecution for Mr. Kostenko’s further placement into a pre-trial detention center on a criminal case on “desecration” [sic!] of an electoral poster of the “United Russia” party. On January 4, 2012, the court refused to arrest Mr. Kostenko, and on January 5, 2012 he was released, after spending a total of 30 days under arrest. At the time he made the following statement to the public:

“At 6.30 am I was released from the pre-trial detention center located at 6, Zakharyevskaya Street [in St.Petersburg]. I was greeted by about 30 people with festive fireworks. No sooner had I arrived to my place of residence with my friends, who had supported me, that unknown persons began to break into my apartment door, claiming that they were police officers. They demanded to let them into the apartment in order to ascertain the legality of the presence of people in it. Considering this situation, I could say that these events were undoubtedly a case of political repression. Despite this, the fight will continue”.

On December 13, 2011, Sergey Golubok, the lawyer of Mr. Kostenko, filed a complaint with the European Court of Human Rights concerning Russia’s violation of Articles 6 (fair trial) and 11 (freedom of assembly) of the European Convention on Human Rights regarding the first arrest of Mr. Kostenko. Later, in May 2012, the UN Human Rights Committee communicated a complaint about the political persecution of human rights defender Filipp Kostenko, which had been filed with the support of ADC “Memorial” by lawyers Olga Tseytlina and Sergey Golubok after the human rights defender had been sentenced to a second administrative arrest.

In November 2015, the UN Human Rights Committee on the complaint of Filipp Kostenko stated that Russia violated Articles 14 (right to a fair trial) and 19 (right to freedom of speech) of the International Covenant on Civil and Political Rights, that Mr. Kostenko had been subjected to unlawful reprisals because of his activist work. In a separate statement, the Committee pointed to the inadmissibility of the use of arrest for obscene language in public: the court considered such a punitive measure disproportionate to the offense committed.

Belarussians Speak Out Against the War

ECtHR Registers Complaint From Environmentalist and Human Rights Defender Johannes Rohr, who was Banned From Entering Russia for 50 Years by the FSB