ADC “Memorial” congratulates everyone, workers and people who cooperate with FIDH, on the 90th anniversary of the organisation.

In December 2012 FIDH was 90 years old, the president of the organisation Mrs. Souhayr Belhassen dedicated this anniversary to all members of FIDH imprisoned because of their work connected with human rights defence. The anniversary ceremony took place on 10 December 2012 in city hall of Paris in presence of Mayor Mr. Bertrand Delanoë, the author of The Universal Declaration of Human Rights of 1948 Mr.Stéphane Hessel and many famous journalists, human rights activists and artists.

‘…It was 90 years ago, yes, ninety years ago, that a group of activists from human rights organisations in France, Germany, Belgium, Hungary, Egypt and ten other countries met, to build an international human rights movement on the vestiges of the First World War: they created the F(..)I(..)D(..)H(..).
These precursors were seeking to build a society that went beyond national borders by placing human rights at the heart of societies, above partisan, economic or national interests.

In 1927 they called for the adoption of a worldwide declaration on human rights and the creation of a permanent international criminal court. Decades later, the Universal Declaration of Human Rights was adopted and the International Criminal Court was born. A legal framework was created for human rights, rights for each and every individual to claim.

Our fight has weathered the years, against the rise of anti-semitism and nationalism, imperiling the lives of our predecessors. Victor Basch, an FIDH founding member and president was assassinated by the French militia in Lyon in 1944.

Our predecessors fought colonisation and all forms of arbitrary judgement during the Cold War and strove for a more just and equitable world. They have inspired human rights activists the world over.

Now, as before, they are in the front line, striving day in day out for the universality of human rights, for the effective, tangible application of women’s rights, the right to justice, freedom of speech and freedom of belief and the right to dignity.
They pay a high price. As we celebrate our 90th anniversary this evening, my thoughts go to the 26 FIDH activists who are in prison, right now.

– I think of Ales Bialiatski, an FIDH Vice President and President of Viasna, in Belarus, who has been sentenced to four years in prison and hard labour.

– I think of Nabeel Rajab, an FIDH Secretary General and President of the Bahrain Centre for Human Rights who has been sentenced to three years in prison without parole.

– I think of Nasrin Sotoudeh, in Iran, who will be awarded the Sakharov Prize next week. We hope that this prize will contribute to ending Nasrin’s isolation after she was sentenced to 11 years in prison and barred from practicing law for 20 years. I am thinking about her three colleagues from the Iranian Defenders of Human Rights Centre who are in the same situation.

– I think of Muharrem Erbey, in Turkey, Vice President of the Turkish Human Rights Association and 13 of his colleagues who are also behind bars.

– I think of the five members of the Human Rights Society of Uzbekistan who are in prison, they too.

It is to them that I dedicate this gala evening.

Your presence here this evening is a sign of your support for our fight. In their name, and in the name of FIDH, I thank you. 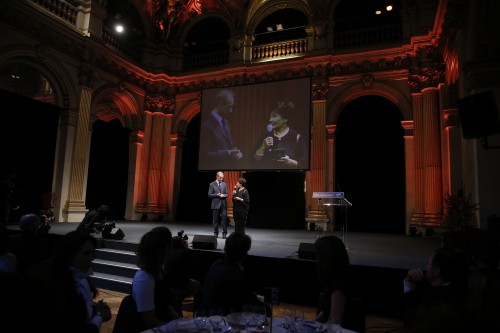