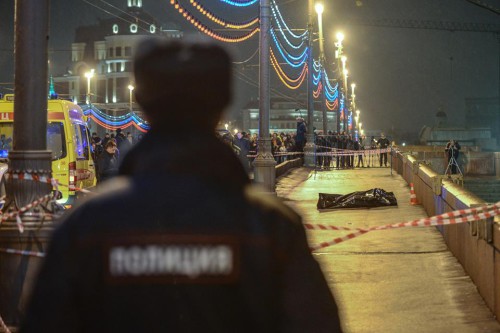 On the day of the funeral of Boris Nemtsov – a bold and consistent critic of the Russian authorities, who was killed near the Kremlin by gunshots in the back (the murderer, of course, disappeared without a trace and it seems an impossible task to find him at the moment!) the words of a wonderful Russian writer Arkady  Belinkov sound really important:

“All people should realize that if human dignity is assaulted and if human personality is treated as if it was worth nothing, if a person is sacrificed in the name of so-called higher interests and if a people are unable to control their own lives, if human will and honor are trampled, if there is no freedom of speech, but there are a lot of hypocritical phrases about freedom, if fear of authority strangles us, if the government shuts the skies from our sight while tyranny and injustice reign supreme and streams of hypocrisy run high, if unscrupulousness in means of achieving goals becomes state policy, if they claim that they are in a position to unleash wars and they do so, if the country bursts with chauvinism, if fanaticism, bigotry, hatred and complacency bloom, if the government intervenes in people’s private lives, if inhumanity, vindictiveness, surveillance, punishment and penalty rule, if people are taught arrogant confidence in their superiority over other nations, it is fascism, tyranny, despotism, and they must be hated passionately, devotedly, selflessly and without distraction for anything else.

If the epoch unleashes war under various pretexts, presenting them under different names (“war for living space”, “war of liberation”), if it teaches to admire victories, military parades, awards and patriotic tirades, if it draws people into excesses, stifles freedom on various occasions and preaches terror under different names, tramples on freedom of press, destroys opposition, spits on its own laws, tortures in its dungeons all who begin to understand something or who understand nothing at all, if it destroys opponents for them not to possess any threat to it or dedicated fools in order to teach a lesson to others (because if they kill such people, what will happen to us!), if it makes people think the same way, and people get used to think and talk same as everybody else… if hypocrisy, venality and viciousness bloom, if human life swims in high, blissful, warlike, vile, boastful, crackling, sentimental and sweet words that nobody believes, then it becomes doubtless that this epoch selects certain people to represent it and their actions illustrate what kind of state, public and economic system it considers to be ideal. Such qualities are stimulated only by totalitarian, police, absolutist state, where the power was captured by a gang of criminals.”

There is nothing to add to this. We cherish the memory of Boris Nemtsov!

Zalina Slanova has passed away