In advance of two important dates—Human Rights Day on December 10 and International Migrants Day on December 18—the OSCE Office for Democratic Institutions and Human Rights and ADC Memorial organized the online conference “Migrant Children in the Former Soviet Union: What Comes After the Chisinau Agreement?” on November 7 and 8, 2020. Participants included international child rights and human rights experts and representatives of international organizations, the governments of Eastern European and Central Asian countries, and civil society.

Discussions centered around opportunities for incorporating contemporary international child rights standards into the laws and practices of countries in the region and possibilities for applying these standards to return procedures and interstate cooperation aimed at replacing the outdated Chisinau Agreement on the Return of Minor Children to Their Country of Origin (2002).

During the discussions, Professor Manfred Nowak, an independent expert for The United Nations Global Study on Children Deprived of Liberty, and Committee on the Rights of the Child experts Renate Winter and Mikiko Ōtani emphasized that the immigration detention of children violates most of the rights enshrined in the Convention on the Rights of the Child (1990) and that a ban on immigration detention is one of the most basic international human rights standards. 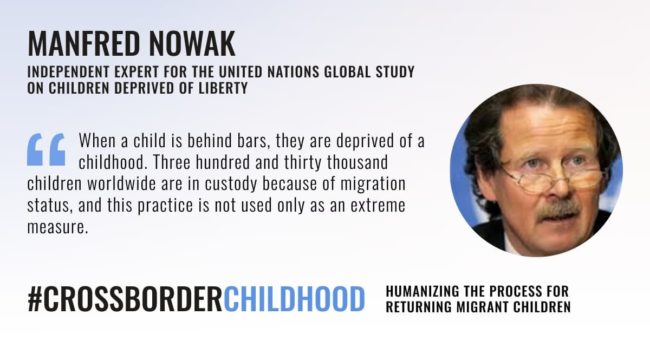 The other fundamental standards are non-discrimination, a ban on separation from parents, account for the child’s opinion, and decision-making based on the child’s best interests. Roos-Marie van den Bogaard (PICUM) presented on the best interests of the child and ways to formalize these interests in procedures:

“The State uses euphemisms to avoid calling closed institutions prisons; Russia, for example, calls them transit centers for children. But the children being held there cannot leave of their own volition, so these are in fact actual prisons.”

Gulnara Zhamgyrchieva stressed that the practice of depriving children of liberty and separating them from their parents solely due to their immigration status should be recognized as an unacceptable practice that is extremely outdated and does not correspond to international norms. Maya Banareska spoke in support of overhauling the Chisinau Agreement and added to the list of proposed initiatives the urgent need for countries to sign a new agreement that would incorporate clearly-defined procedures, including procedures for force-majeure situations like the COVID-19 pandemic and so forth.

Ruslan Kolbasa, Director General of the Directorate for the Development of Social Services of Ukraine’s Ministry of Social Policy, Ekaterina Mikhailas, a representative of Moldova’s Department for Refugee and Migrant Affairs, and Igor Kishke, a representative of the Ministry of Health, Labor, and Social Protection of the Republic of Moldova, presented on the particulars of national systems and planned and completed reforms.

All the government representatives and human rights ombudsmen pointed to the need for countries affected by migration to develop new regional instruments on matters related to migrant children and to establish close cooperation. This opinion was also shared by the members of civil society who spoke.

Tineke Strik, a member of the European Parliament (Greens/EFA Group) stressed that readmission agreements between the EU and countries in the region must be more carefully monitored in terms of human rights and that the implementation of these agreements must correspond to international children’s rights standards.

ADC Memorial and its partners from the Eastern Partnership countries have implemented the project “Promotion of modern international standards of children’s rights: deinstitutionalization and humanization of closed institutions in Belarus, Moldova and Ukraine”