On October 14, 2015, six-month-old Umarali Nazarov died in Saint Petersburg after he was forcibly taken from his mother at a police precinct while she was being investigated for violating migration rules.

On October 13, Umarali’s mother, Zarina Yunusova, was at home with her husband’s brother, Daler Nazarov, when three migration officers in civilian clothes arrived. Without identifying themselves, these officers demanded that Zarina and her brother present their documents, but neither of them had their passports on them. The only document they did have was Umarali’s birth certificate, but Zarina did not present this document because she did not understand the migration officers, who were speaking Russian and did not have an interpreter with them.

Yunusova, her brother-in-law, and little Umarali were taken to the precinct. In these cases, law enforcement officers must explain the circumstances of detention and ask the child’s parents to show them a birth certificate. These officers, however, took Umarali from his mother without providing her with an interpreter and without determining if Umarali actually even was her child. This is notable because children are not separated from adults in detention centers even in cases of expulsion.

Umarali’s grandmother brought documents confirming the relationship between mother and child to the precinct, but these documents were not accepted. The child was not returned, but was instead taken to Tsimbalin Hospital, where he died his first night there for unknown reasons.

The measure of separating a child from its parents without permission was unjustified and illegal in this situation. The law allows a child to be removed from its mother only under a court decision on deprivation of parental rights. Police officers totally ignored the legal requirement that state workers must not independently make a decision to interfere in a family, even if it is clear that there are legal grounds for this during a visit or raid. In extreme situations, the federal law “On the Prevention of Child Neglect and Juvenile Delinquency” allows this level of interference, but only if the grounds for this are recorded in a document. This kind of document was not written up during the raid, but was instead added to the file later. To justify their actions, police officers cited Order of the Russian Ministry of Internal Affairs No. 845 “On Approval of Instructions for the Organization of the Activities of Juvenile Affairs Units of RF Internal Affairs Bodies,” but even this document only allows police officers to take neglected or unsupervised children.

It was only six days after Umarali’s death that the RF Investigative Committee opened a criminal case. Umarali’s mother was not questioned in a timely manner and was later expelled from Russia. During the investigation, it was not just migration officers, police officers, and doctors who came under suspicion for causing the child’s death due to improper performance of their professional obligations, but also the parents themselves. In fact, attempts were made to prosecute the parents for criminal liability for “failing to perform their obligations to raise a child.”

In October 2016, the criminal case was closed “for absence of a criminal act.” Attorneys appealed this decision with support from ADC Memorial. The appeal listed a number of violations committed during the investigation. The first instance court found that the decision to close the criminal case was illegal, but did not recognize a violation.

The case was reopened thanks to the work of the attorneys, but was later closed again. Before the criminal case was closed for a second time, Umarali’s father, who remained in Russia, obtained information from an expert review that the child’s cause of death was CMV infection. However, a request for a second independent expert review was rejected. Law enforcement authorities did not allow Umarali’s parents to see his body while it was in Russia, but representatives of the Consulate of Tajikistan assured them that an independent expert review had been conducted. However, the body was sent to Tajikistan and buried despite promises to the contrary.

After being denied the opportunity to investigate the case of Umarali’s death, the attorneys decided to appeal his separation from his parents, the legality of which had never even been investigated. The defense requested that a criminal case be opened into abuse of official powers by police officers resulting in the child’s death, but this request was rejected. The attorneys filed an appeal with the district court and then with the Saint Petersburg City Court, which found that the actions of the police officers were lawful.

ADC Memorial believes that Umarali’s forcible separation from his parents led to his death. The systemic practice of declaring migrant children “lost” or “abandoned” (even if this is not the case) and putting these children in a hospital (even when they are healthy) must be ended without delay. 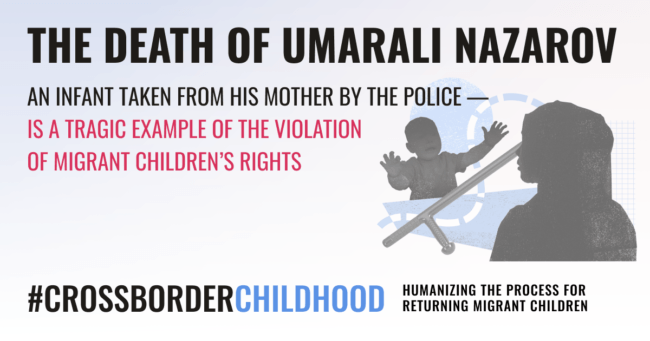 We have left. Voices of Ukrainian children