Due to the COVID-19 pandemic, which has resulted in departure of labor migrants from Russia, the Russian labor market faced serious problems with labor personnel. The largest state and private enterprises, having lost the source of cheap labor, started incurring colossal financial losses.

In early March 2021, Irek Fayzullin, the head of the Ministry of Construction of the Russian Federation, said that Russia lacked some 1.2 million construction workers, and proposed to simplify the rules of entry into Russia for labor migrants. The Ministry of Agriculture is also worried about the lack of labor force, and back in February 2021, it appealed to the Russian government with a request to allow migrants to come into the country for seasonal work. Both ministries stated that their industries could not cope without foreign labor, since the Russians, despite unemployment, were not ready to work for the wages offered by businesses, and the number of Russian workers was not adequate, given the scale of production in the construction, agricultural and other sectors.

Another proposal, which caused a lively response from both state officials and businessmen, as well as sharp criticism from human rights activists, came from none other than the Federal Penitentiary Service (FSIN), whose head Alexander Kalashnikov proposed replacing labor migrants with prisoners in order to socialize the latter. Anticipating comparison with the Soviet Gulag prison labor system, Kalashnikov noted that such a comparison was inappropriate. “These will be absolutely new decent conditions”, he said, “because a person will work and live in a hostel or will rent an apartment, even together with his family if he wishes so, and he will receive a decent salary”.

It suddenly turned out that the proposal made by FSIN found support from various ministries and government bodies: not only it was approved by the speaker of the State Duma of the Russian Federation Vyacheslav Volodin, the Ministry of Justice and the Investigative Committee, but the head of the Russian presidential Human Rights Council Valery Fadeyev and Russian ombudsman Tatyana Moskalkova also favored it. An article on Russian official news agency RIA “Novosti” website claimed that the GULAG system “had become a social lift for hundreds of thousands of people”, and the special training received during the years of imprisonment had been a “ticket to [a new] life” for a prisoners after serving their sentences. The very fact of the publication of such a cynical and offensive text by the country’s largest news agency leads to some unpleasant thoughts, indicating that the system of camps with slave labor conditions can receive both legal recognition and public support.

Meanwhile, even without the planned innovations, forced labor of prisoners in unbearable, while humiliating conditions are the grim reality of Russian penal colonies. The salary of convicts is many times less than that which labor migrants receive for the same work. For example, former prisoners of correctional colonies in Krasnoyarsk, who worked at an aluminum plant there, complained about working conditions and the amount of their wages: they quoted salaries of 1500-3000 rubles per month for workers, while handymen received 500-800 rubles a month, and in some cases as little as 40-50 rubles per month.

The topic of prison labor has probably received the greatest public resonance after the famous letter written by Nadezhda Tolokonnikova, then a convict in Pussy Riot case, from Mordovian correctional colony No. 14: the duration of working day for prisoners there was 16-17 hours, they worked practically seven days a week, getting a salary of just 29 rubles a month. In 2019, the human rights organization “Zona Prava” spoke about three more complaints from women serving sentences in correctional colony No. 14, who reported slave-like working conditions of prisoners. One of the applicants complained that inmates had been regularly forced to work overtime, threatened with beatings and prohibited from using their personal belongings in case of any disobedience. In addition, expired food products had been sold in the shop of the colony, and in cases of tuberculosis, the administration had not isolated sick inmates from other prisoners. Another complainant reported that the medical workers had kept silent about cases of work-related injuries in prisons. Sergey Petryakov, the head of “Zona Prava” human rights NGO, noted that “people who served their sentences in a colony at different times gave the same testimony: there were irregular working hours and degrading treatment there”.

The situation in the Russian settlement colonies is also difficult. According to the Russian Criminal Penitentiary Code, the regime in the colony-settlement is milder than that of correctional colonies, but many convicts try to avoid getting “to the settlement”, one of the reasons for this being the fear of particularly harsh working conditions there. For example, those serving sentences in the settlement colony No. 27 in the city of Leninsk (Volgograd region), complained about the lack of control by the labor inspectorate over the length of the working day, reported the lack of rights in choosing type of work, and the lack of informing the convicts about work standards and working conditions. One of the types of work in this colony is planting and picking vegetables for 8-9 hours a day with a salary of about 900 rubles per month, of which the prisoners receive just about 200 rubles. At the same time, work takes place in extremely harsh conditions there. In Volgograd region, in May the air temperature reaches 35 degrees Celsius, and in summer up to 50 degrees Celsius, workers are bitten by stinging insects, such as mosquitoes, midges, horseflies and gadflies, whose bites are extremely painful and can cause allergic reactions.

Those working in correctional centers appeal to human rights defenders with complaints about low wages, irregular working hours and poor living conditions. At the same time, inmates of correctional centers must provide themselves with food. Problems with obtaining medical care remain acute: convicts receive medical care on their own outside of the correctional institutions upon a written application addressed to the head of the institution. The head of a correctional institution, at his discretion, can give such permission, but he may refuse to do so, and there are many such refusals reported. Provision of meetings with relatives and visitors is also random. Inmates of penal colonies try not to complain about low wages, just as they do not complain about irregular working hours and violations of safety precautions, since prisoners work for earlier parole and are ready to put up with violations of their rights. But prisoners in correctional centers do not have this incentive: when they are transferred to the correctional centers after reconsideration of their term, in accordance with Article 80 of the Russian Criminal Code, the period for counting earlier parole is reset to zero due to replacement of the unserved part of their sentence with a term in milder conditions.

Perceiving prisoners as cheap labor, whose labor rights can be neglected, is also reflected in a brochure from the FSIN website, which is aimed at potential employers: 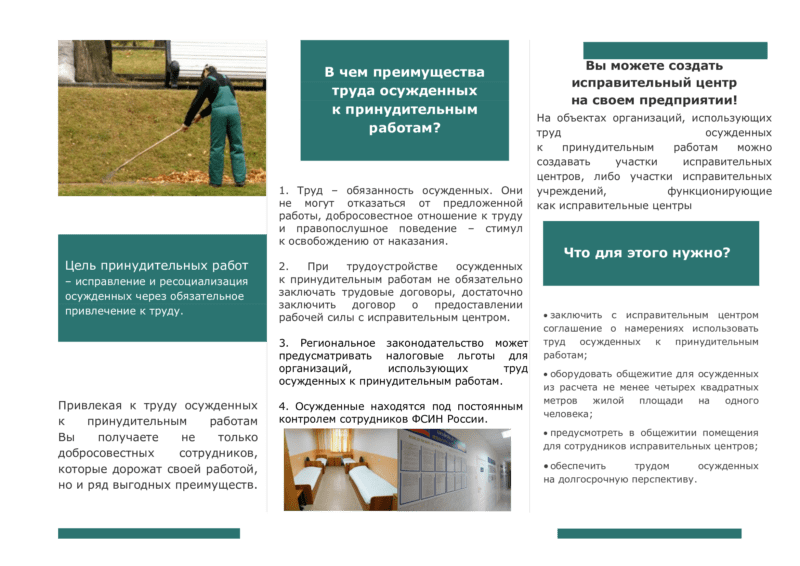 “What are the advantages of work for those sentenced to forced labor?

A comprehensive study “Slave labor of prisoners in modern Russia”, which was carried out about 10 years ago by members of the Public Observation Commission of Chelyabinsk region, noted the forced nature of labor, poor working conditions, lack of control by the labor inspection over the length of the working day, lack of rights in choosing the types of work, lack of informing the convicts about the norms of production, the system of payment, as well as the convicts’ disinterest in the results of their work. All this is well illustrated by Section 1 of the FSIN brochure: labor is the duty of convicts according to the Criminal Penitentiary Code, they cannot choose with whom and under what conditions to conclude a labor contract, they are obliged to work, because this is “a condition for their correction”.

Upon arrival to the colony, the convict is immediately explained that “in accordance with the provisions enshrined in Articles 103, 104, 105, 129 of the Criminal Penitentiary Code of the Russian Federation, Articles 11 and 28 of the Labor Code of the Russian Federation, the norms of labor legislation concerning the procedure for concluding an employment contract, hiring, dismissal from work and transfer to another job do not apply to convicts serving sentences in places of deprivation of liberty: convicts are involved in labor not under an employment contract, but in connection with the entry into force of a court conviction. The basis for admission to work is the order to enroll the convicted person to the position (the consent of the convicted person is not required), the basis for dismissal is the order to dismiss. Refusal to work is a grave violation, which, according to Section 1 of Article 116 of the Russian Criminal Code, entails corresponding legal consequences”.

Section 2 of FSIN’s advertising brochure is similar to the typical scheme for hiring labor migrants through an intermediary firm. Labor migrants actually work according to such an outsourcing scheme: the customer signs a contract with a company for the performance of certain works or services, and the company / private employment agency provides workers for this, maintains all documentation and pays the workers. All this, undoubtedly, is attractive to the customer and increases the profitability of the projects, but it creates opportunities for manipulation by the intermediary firm, the lack of transparency in its settlements with employees and the difficulty of bringing it to justice for violations of labor rights of the employees.

One can assume that the promises of Alexander Kalashnikov about “market conditions for employment” can be implemented in terms of non-transparent outsourcing and the provision of agency labor services, as is now often the case with labor migrants who receive lesser salaries for their labor, not because they work less or worse, but because their employers try to save on wages and security. But at the same time, labor migrants are still not ready to receive less than a certain amount and can look for other jobs. But, as human rights defender Igor Kalyapin noted, “if a labor migrant does not like working in such conditions, he can pack his suitcase and leave. And the prisoner has nowhere to go”. The promise of adequate salaries from the Federal Penitentiary Service is unlikely to come true. Prisoners can be paid any extremely low amount in exchange for promises of parole, positive testimonials, permissions for visits of relatives, permissions to visit a doctor or granting a leave.

Forced labor cannot be of high quality and efficiency; this was refuted long ago by both science and practice. If there is a shortage of workforce in the industries where migrants used to work, perhaps it is time to improve working conditions there and raise wages in order to attract new workers? If the Federal Penitentiary Service plans to finally begin correcting inmates through labor, then perhaps the time has come to recognize the provisions of the Labor Code as being fundamental in the employment of convicts in order to motivate them to work and ensure their safety on the job, observance of working conditions and adequate payroll.

Kazakhstan: Mass protests are stifled by violence and further suppression of fundamental rights