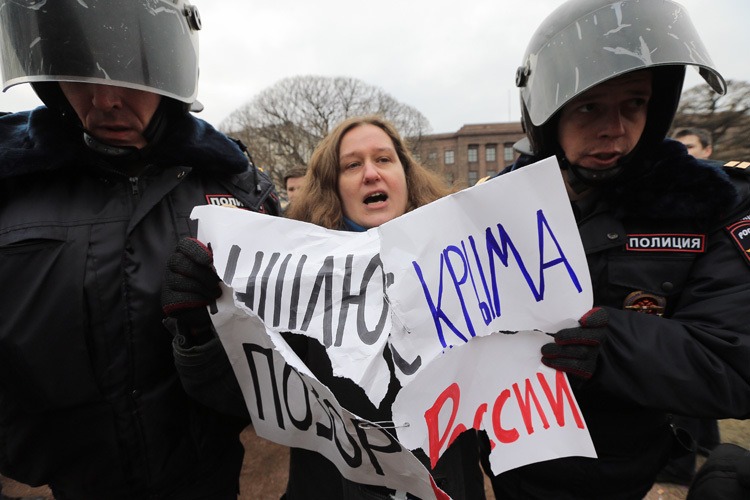 An administrative legal case against Stefania Kulayeva regarding alleged breach of the Code of administrative violations on the rules of public assemblies and “failure to observe legal demands of police officers” on March 2, 2014, during street protests against annexation of Crimea by Russia, has been finally completed after two months of consideration. The court stated that it failed “to discover corpus delicti” on both articles of the code which were under consideration and ruled to stop legal procedures on both cases (Article 20.2 section 5 and Article 19.3 section 1 of the Code of administrative violations).

During the court hearings the prosecutor’s claims on participation in illegal manifestation, i.e. that Kulayeva “was among the mass of citizens in order to publicly express her opinion by shouting phrases against authorities and state structure, which expressed her position with the aim of influencing public opinion” – were not proven. The court found it impossible to accept these claims made in police officers’ reports (astonishing in both their form and content) and to “consider these testimonies as truthful in the absence of other proofs and found them insufficient to prove S.B.Kulayeva guilty of legal violation of Article 20.2 section 5 of the Code of administrative violations”.

Contrary to that, the court accepted explanations provided by Kulayeva and her witness for the defense N.L.Berman to be trustworthy. According to these testimonies, Kulayeva didn’t shout anything and stood away from the rest of the protesters with a poster that read “Anschluss of Crimea – disgrace for Russia”. She came to St.Isaak square in order to “publicly express her opinion” because she “disagreed with Russian troops entering the territory of Crimea, which led to military conflict between Russia and the Ukraine”.

The fact that the court confirmed the defendant’s right to publicly express her opinion is extremely important, same as an unbiased approach to the testimonies presented by the parties in court during the course of the court hearings.

The court has also failed to discover “illegal negligence” that Kulayeva was charged with based on her refusal to go to the police bus by herself as she was detained, because as the video footage of the event that was considered by the court showed, “such demands (to go to the police bus) were not made by police officers to people , including S.B.Kulayeva, … and the latter was lifted from the bench by her arms and taken to the police bus”. Based on that, the court didn’t discover corpus delicti for Article 19.3 section 1 and ruled to stop legal procedures on this.

Court ruling regarding Article 19.1 (in Russian)

Court ruling regarding Article 20.2 (in Russian)