On October 14, political prisoner human rights defender, a member of Viasna’s Board and vice-president of the International Federation for Human Rights FIDH Valiantsin Stefanovich is celebrating his 50th birthday in prison. 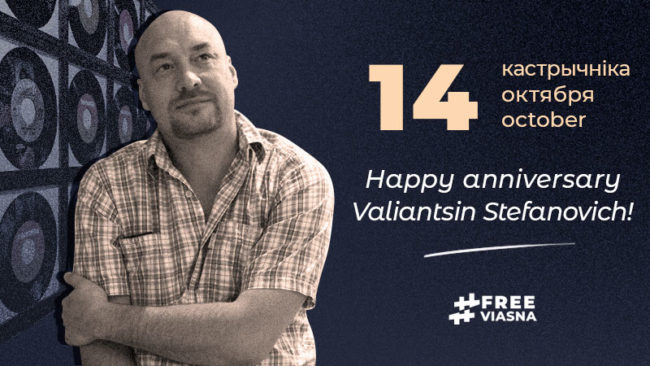 At the moment 6 human rights defenders from “Viasna” are behind bars, Tatsiana Lasitsa, a Viasna volunteer, was recently released after serving her sentence.

We publish Valiantsin Stefanovich’s speech written by him in jail for the ceremony of awarding The Albie Awards 2022 to the Human Rights Center “Viasna” by the Clooney Foundation in the “Justice for Democracy Advocates” category:

Let me express my sincere gratitude for the award on behalf of the Human Rights Center Viasna. My name is Valentin Stefanovic, I am 49, and I am a member of the Board of Viasna, as well as Vice President of FIDH—International Federation for Human Rights.

For over a year I am in the cellars of a gloomy 200-year-old prison in the center of Minsk.

At various times, it held prisoners of Russian tsarism, victims of stalinist Great Terror, of the Nazis, and now—political prisoners of the Lukashenka regime.

In Belarus, this current human rights crisis has been going on for 2 years now. It is on a scale approaching the worst times of our past—the times of the communist totalitarianism. Thousands of political prisoners are being held, thousands of ordinary citizens—men and women, students, pensioners, journalists and human rights activists—are deprived of their freedom just for expressing their opinions, demanding fair elections, and reporting on what is happening in the country.

People are still being held in appalling conditions of detention centers, subjected to inhuman and cruel treatment, thousands of people throughout the country were tortured in August 2020 and later. All these acts have never been denounced. The perpetrators were not punished but received high posts and titles. Belarus’ legal system has completely degraded and is unable to protect the rights of its citizens. At the same time, the state media and TV are trying to convince us that human rights and democracy are an invention of the “collective West” that is “alien to our traditional values.” That we have some kind of special understanding of them, our “special way,” that we are almost a “separate civilization.” But in fact, this cheap demagoguery and populism have one goal—to justify the 30 years of rule by one person and the absence of democracy—competitive elections and self-governance, pluralism of opinions and ideas. This is what democracy is, and it cannot be “western”, “eastern”, or “southern”. The country’s either a democracy or not.

Regrettably, even in the 21st century, Belarusians still have to fight for a seemingly simple thing, democracy. Now, the autocracies of Russia and Belarus strive to impose their “separate civilization” on other peoples, even by waging wars. This is why the work of human rights defenders becomes especially important, as human rights are a culture of peace, not war.

Human rights are universal, inalienable, and belong to us from birth because we are humans. They do not depend on the will of individual autocrats, who cannot take them away from us.

In this difficult situation, Belarusian human rights defenders dare to keep on with their work. So does Viasna.

This award is a great support to us in our mission. A support to the members of Viasna who were thrown behind bars for their peaceful, legitimate human rights activities, those who paid a great price for that—their personal freedom: Ales Bialiatski, Uladzimir Labkovich, Leanid Sudalenka, Marfa Rabkova, Tatsiana Lasitsa, and Andrei Chapiuk.

I would like to end with the words of our classic, Maksim Bahdanovich: Belarus, your people will see its golden bright days!

Thank you so much,