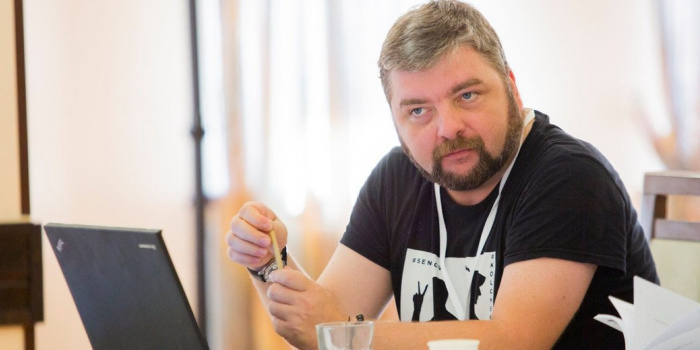 Human rights activist, journalist, and co-founder of ZMINA human rights center and NGO “Hromadske Radio” Maksym Butkevych has been taken prisoner by the Russian invaders near ​​the captured Zolote and Hirske villages in Luhansk region, Babel and Hromadske Radio report.

Russian propagandists announced the capture of Butkevych on June 24, publishing a video of his interrogation.

In her comment to Babel, Butkevych’s mother Yevgenia said that she learned about what had happened to her son from a video that was posted in the media in late June. Butkevych has not contacted her since then. The mother does not know where he is now and in what condition.

According to her, the United Center for the Search and Release of Prisoners (supervised by the SBU and the Main Intelligence Directorate) is working on the issue of Butkevych’s release. The mother has not yet received any information about her son: to all her inquiries, she is told that ‘the work on the case is ongoing.'”

Butkevych’s mother added that only two prisoners from her son’s platoon have been in contact. There were two calls – on June 25 and 26.

“They already know all about him in russia, and they know it in a completely distorted way. Maksym is a human rights activist who has never worked for any government. And they say that he is a ‘Nazi’, ‘a Nazi platoon commander,’ etc. Moreover, it seems to us that they have mixed other people with the same family name, as well as his full namesakes, into the image of our Maksym. We believe that it is necessary to talk about what kind of person Maksym is and how much he has done in the 20 years of his human rights work. To say that Maksym has never been, and is not, ‘russophobic’ or ‘nazi,'” his mother told Hromadske Radio.

Human rights defender Maksym Butkevych went to serve in the Armed Forces of Ukraine in early March 2022. He put aside his work of helping refugees, as well as his journalistic, humanitarian, educational, and human rights work.

“Unfortunately, I have to put my refugee assistance, humanitarian, and human rights activism on hold. I think you can understand why from the photo […]. There are times when you have to be ready to defend what is important – I firmly believe that. And the rest will wait until after the victory,” he wrote on Facebook at the time.

Since the spring of 2014, Maksym Butkevych has been helping displaced persons, as well as protecting refugees and combating discrimination. He has been engaged in human rights protection for the past 20 years in total.

He joined the Hromadske Radio team in the fall of 2013. During the Maidan, he used to be a volunteer reporter and Hromadske Radio host. However, he continues to be an active member of the “Hromadske Radio” NGO and has become their patron.

Maksym Butkevych is a Ukrainian human rights activist and journalist. Coordinator and co-founder of the “Without Borders” project, aimed at helping asylum seekers and Ukrainian immigrants and countering hate speech. Co-founder of ZMINA human rights center and Hromadske Radio. Previously, he worked for the BBC World Service and a number of all-Ukrainian TV channels, has been a guest lecturer at NaUKMA for several years, and was also a board member of Amnesty International’s Ukrainian representative office and the community council under the Ministry of Internal Affairs.