Since the beginning of the full-scale Russian invasion, many Ukrainian Roma, including those from Transcarpathia, fled the war to European countries. However, most of them did not receive protection when faced with local bureaucracy and discriminatory attitudes. Women and children were in the most vulnerable position.

The Romaversitas Foundation published the results of a study according to which Roma families who fled from Transcarpathia to Hungary faced problems in finding work and housing, receiving humanitarian and medical assistance. Difficulties arose not only among adults but also among children – many Hungarian schools refused to accept Roma children. Many Roma refugees have returned home after cases of discrimination and denial of humanitarian assistance and benefits in Hungary. 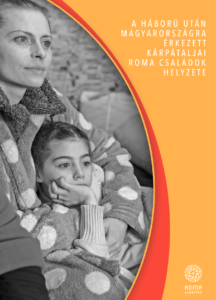 The formal reason for the refusal of assistance (not only in Hungary but also in the Czech Republic, Romania and other countries) was the fact that the Roma have Ukrainian and Hungarian citizenship, so they did not receive temporary protection, which is provided to citizens of Ukraine in the EU. Theoretically, Roma with dual citizenship are entitled to the same benefits and assistance as other citizens of Ukraine, but in most cases, they do not receive them. Due to the low level of literacy of the Roma refugees, it is difficult for them to overcome administrative obstacles, often they simply do not know who to turn to for help.

Olah Orban, an employee of the Romaversitas Foundation, interviewed representatives of 160 Roma families, mostly mothers who ended up in Hungary because of the war in Ukraine. The study lasted from July to mid-September. Most of the respondents had already been in Hungary for several months, but almost 60% answered that they could not enroll their children in school. At the same time, many of them considered classes conducted by volunteers or church organizations to be schooling, so the real picture could be much worse.

Under the laws of Hungary and the EU, refugee children are required to attend school in the same way as Hungarians, and the school closest to their place of residence must accept them. However, the Transcarpathian Roma were mainly placed not in apartments or houses offered to Ukrainians by local residents, but in isolated temporary camps. They were transferred from camp to camp more than once, and many had no idea where they would live in autumn or winter, which school would be nearby with their place of residence. Because of this uncertainty, children did not attend school.

Several Roma women who ended up in such an isolated “container” hotel in the city of Győr reported that after long displacements they were going to return home to Ukraine: the conditions in which they are living are unbearable.

According to the Office of the UN High Commissioner for Refugees, 31,000 refugees from Ukraine are registered in Hungary. However, according to other estimates, there may now be about 43,000 of them in Budapest alone. Many of them do not appear in the statistics due to having dual citizenship.

In September of this year, Judit Sentirmai, a spokeswoman for the city’s mayor’s office, announced that about 1,000 Ukrainian refugees were officially provided with social housing, they are supported by the municipality of Budapest. Basically, these are Hungarian-speaking citizens of Ukraine who find themselves in a difficult situation. The mayor’s office itself maintains housing for about 300 people, half of whom are children, and all of them attend kindergarten or school.

According to the researchers, there are examples of Roma children going to school in Hungary, but all these children experience problems due to a low level of education or difficult adaptation to new conditions.

“There are children who, despite having completed grades 7-8 in Ukraine, have not learned to read, write and count,” says Ondrash Saraz, an employee of the hostel for refugees. According to him, the local school cannot work with such students, as there are not enough teachers. There is also no special teacher who could deal with lagging behind on an individual basis. They are currently looking for volunteers for this.

For Roma, it is very difficult to get a job. Men are in a slightly better position as there is a demand for manual labor. According to the study, many Roma women do not even have a primary education, and due to caring for toddlers and older children who are not enrolled in schools, they do not have free time. Only 15% of the respondents work, mostly as cleaners or kitchen assistants, but there are also those who have found a job caring for the elderly. There have been cases of their sudden dismissal, work without a contract, and salary delays.

One of the respondents is the mother of a diabetic child. She cannot work, as her son needs round-the-clock supervision. She is not able to find a suitable school and a job near the school on her own. In addition, she, like Him, needs a school where he can study, and a woman needs a job that will be next to the school. However, not having the appropriate contacts and knowledge, the woman has no idea who to contact with these questions. In addition, like most Transcarpathian Roma in Hungary, she constantly faces discrimination in the labor market.