On the eve of the International Roma Day, ADC Memorial informed the UN Human Rights Council about the situation of Roma women and girls affected by the military conflict between Russia and Ukraine. This information will be used for the thematic report of the UN High Commissioner for Human Rights on this topic.

The situation in the East of Ukraine remains unstable, and recently it escalated. During this undeclared war, thousands of militarians and civilians were killed; the Ministry of Social Policy of Ukraine reports about 1.46 million registered internally displaced persons; the Ministry of Internal Affairs of Russia reports about hundreds of thousands of Ukrainians who received Russian citizenship during the years of the conflict, including residents of the unrecognized “Donetsk and Luhansk People’s Republics”. 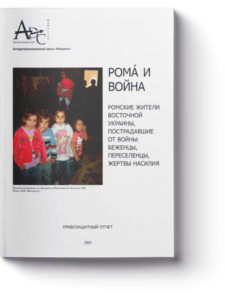 The number of Roma who left their former places of residence in the war zone was estimated at about 6,000 in 2014. All the problems typical of Roma communities in Eastern Europe (lack of personal documents, low level of education, poverty, risk of racist violence) were exacerbated by the war. Roma women found themselves in a particularly difficult situation , because in traditional communities they were the ones responsible for running the household, cooking and caring for children, and they were the ones who were looking for ways to survive in a situation of war and the daily risk of violence by military groups.

In Ukraine, Roma women face difficulties in obtaining the status of internally displaced persons and appropriate assistance; obstacles in accessing medical care, including assistance for children and pregnant women. The problem is caused both by the lack of personal documents and by prejudice, which is most widespread against Roma women.

In Russia, most of the Roma who fled the war in the Donbas did not meet the help and support they had expected. In particular, they could not manage difficulties of ontaining legal status and documents that allow legal stay in Russia. Those Roma who joined their relatives found themselves in the conditions typical for compact Roma settlements: overcrowding, lack of basic facilities, risk of demolition and eviction, and the inability to safely and legally connect to electric, gas and water networks. Many women faced difficulties in accessing medical care, receiving pensions and social benefits, as cards  issued by Ukrainian banks could not be used in Russia. There were also problems with birth registration and obtaining personal documents. 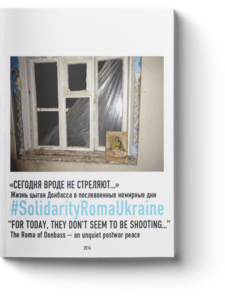 Displaced children in both countries were forced to drop out of school, and very few were able to continue their studies in a new place. Children from compact Roma settlements, even those with Russian citizenship, find it difficult to get an education; for migrant children the access to education is more difficult. Often, parents who try to survive in a new place of residence, do not have the resources and do not prioritize education, especially the education of girls. Local authorities and schools did not provide assistance to the displaced children, although they knew about families who came with children from the military conflict zone.

Various UN Committees have repeatedly referred to the problem of Roma in the war zone in Eastern Ukraine in their recommendations (CEDAW, CERD, CESCR on Russia and Ukraine). The problems of the Roma residents of Russia and Ukraine affected by the military conflict should be the subject of constant monitoring by international bodies, especially now, when the risk of military escalation is high again.