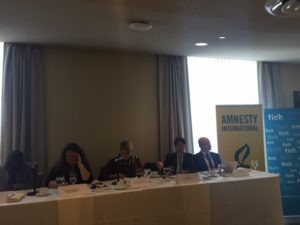 United Nations (New York) – The work of human rights defenders is extraordinarily dangerous and increasingly criminalised in many States, a panel of experts said at the UN today.
The panelists – speaking at an event co-sponsored by Amnesty International, FIDH and the International Service for Human Rights – testified that we are in the midst of a ‘global crackdown’ on human rights defenders, with laws being used and abused to silence dissent, restrict the independence and resources of NGOs, criminalise protest, and detain defenders contrary to international standards.
‘Around the world governments are using the imperatives of economic development and the need to counter terrorism and violent extremism to justify, or as a subterfuge for, laws and policies which unnecessarily and disproportionately restrict the rights to freedom of expression, association and assembly,’ said UN Special Rapporteur on Human Rights Defenders, Michel Forst. ‘Increasingly, these laws not only restrict but criminalise the exercise of these rights and the vital work of human rights defenders,’ he added.

Fellow panelist Sharon Hom, Executive Director of Human Rights in China, testified that recently enacted or proposed laws on national security, counter-terrorism and the management of foreign non-governmental organisations in China all have the purpose or effect of restricting and criminalising human rights work, in contravention of the UN Declaration on Human Rights Defenders. ‘Restrictive and overbroad legislation is increasingly used in China to legitimate the harassment, arrest or arbitrary detention of human rights defenders,’ said Ms Hom, citing as an example the more than 200 human rights defenders and lawyers who have been harassed, detained and even disappeared in China since July 2015.

Paul Nsapu Mukulu, Director of Ligue des Electeurs in the Democratic Republic of Congo and FIDH Secretary General, told the UN event that there is a particularly concerning trend of governments using laws to restrict the rights to freedom of expression, association and assembly in the lead up to elections in African States. ‘Broad concepts such as “national security” and “public order” should not be used to justify arbitrary or disproportionate restrictions on the work of human rights defenders,’ Mr Mukulu said.

Meanwhile, human rights activist and head of Russian human rights NGO ADC Memorial, Stephania Kulaeva, gave evidence that legal restrictions on NGO access to funding from abroad, and the designation of NGOs that receive such funds as ‘foreign agents’ or spies, has forced the closure or relocation of many organisations in Russia. ADC Memorial itself was forced to close its operations in Russia and relocate after being stigmatised as a ‘foreign agent’. ‘The foreign agent law and the more recent “Law on Undesirable Organisations” have a negative impact not only on the NGOs concerned but on the many marginalised or vulnerable individuals and groups who rely on such organisations to stand up and speak out for their fundamental human rights,’ Ms Kulaeva said.

Ms Kulaeva also gave evidence as to the enactment and application of laws which target and criminalise particular groups of human rights defenders or advocacy on particular human rights issues. ‘Russia’s sweeping anti-LGBTI laws not only criminalise homosexuality, but also certain forms of advocacy in relation to the rights to equality and non-discrimination,’ Ms Kulaeva said.
Responding to these disturbing trends, the organisations sponsoring the event – ISHR, FIDH and Amnesty International – called on all States to review and repeal laws and policies which operate to restrict or criminalise the work of human rights defenders and enact specific laws and policies to give full force and effect to the UN Declaration on Human Rights Defenders at the national level, including by enshrining the right to access and communicate with the UN and to be protected from intimidation and reprisals in connection with such cooperation. States should also ensure that the draft resolution on the protection of human rights defenders currently being negotiated at the UN General Assembly contains clear calls and provides explicit directions by States in that regard.