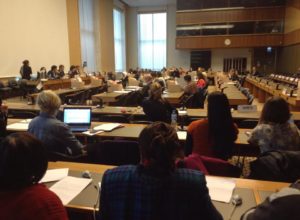 Dear Members of the Committee,

ADC Memorial calls you to include the following measures on elimination of discrimination of women to your recommendations to the Russian Government:

= stop attempts to restrict a woman’s right to control over family planning, stop any form of state support of the traditional views on women as only an instrument of reproduction who can’t independently decide about pregnancy and giving birth. Promote education in sexual sphere and spread information on safe methods of contraception.

= stop discrimination of women in sphere of labor, revoke “the list of prohibited occupations” that declares care of potential mothers and doesn’t take into account the possibility and the wish of women to have children.

= adopt the law on state guarantees of equal rights for men and women; adopt the specific law criminalizing domestic violence; as well as comprehensive state program aimed at eradicating violence against women.

= end political persecution of women – activists of democratic movements, LGBTI-groups and human rights defenders. Abolish the law on “NGOs – foreign agents”, the law on «undesirable organizations”, the law on “propaganda of homosexualism”. Create the conditions for NGOs to conduct their activities freely and safely.