The UN Committee Against Torture (CAT) issued its recommendations following consideration of Russia’s state report made at the Committee’s 64th session. Recommendations of the Committee reflected on the problems raised in the alternative coalition report of civil society organizations, in which the Anti-Discrimination Centre “Memorial” had highlighted the violations of the rights of prisoners of the temporary detention centers for foreign nationals and stateless persons.

The Committee strongly spoke out against widespread use of torture in places of detention and made a separate statement on the case of Mr. Makarov, a prisoner in the Yaroslavl penal colony, which had been widely publicized due to the efforts of human rights activists of “Public Verdict” NGO, who had succeeded in placing the officers guilty of torture in detention, Makarov’s recognition as a victim of torture and provision of state protection fort him.

Other serious problems has also raised concern of the Committee, among them the persecution of LGBT persons, including in Chechnya (which has earlier become the subject of the human rights campaign of ADC “Memorial”); the situation in the Northern Caucasus, including repressions against the head of Grozny’s “Memorial” office Oyub Titiyev; torture of anti-fascists charged as part of the trumped-up “Set’” (“Network”) case; illegal use of anti-terrorist measures, including the case of the Azimov brothers; persecution of representatives of the Crimean Tatar people, Ukrainian activists and opponents of annexation of Crimea (ADC “Memorial” had also wrote about this in a number of its reports and public statements); conditions of detention in places of deprivation of liberty, including detention centers for migrants and others.

The Committee regretted that the human rights organizations, such as ADC “Memorial” and “Public Verdict”, fell victims of repression for provision of alternative reports for the previous review of the situation in Russia (in 2012), which had been regarded by the Russian authorities as “political activity” and had resulted in the recognition of both organizations “foreign agents”. The Committee called for the necessary protection of human rights defenders and journalists and for provision of conditions of their unhindered work, which is especially important now, when employees of the “Public Verdict”, while protecting the rights of victims of torture, have faced unprecedented pressure and threats. 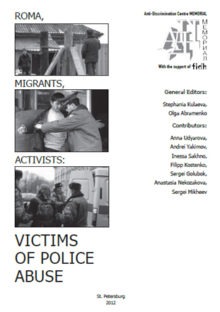 UN CAT: The Anti-Discrimination Centre “Memorial” raised the issue of inhuman detention conditions of stateless and foreign citizens in SUVSIG