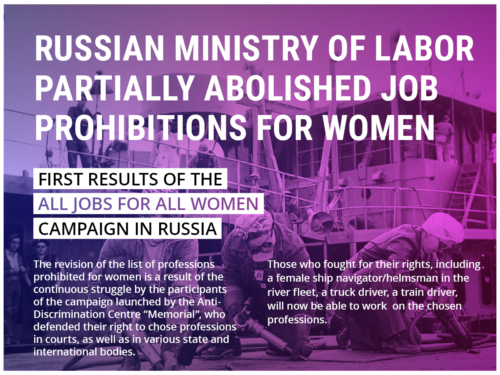 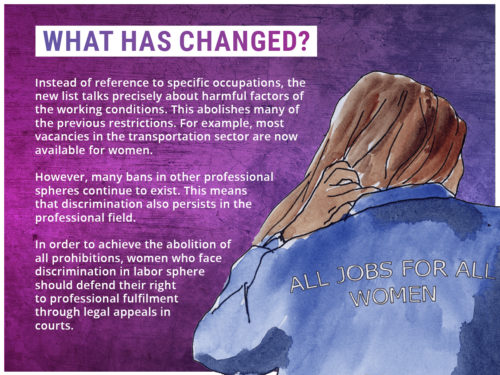 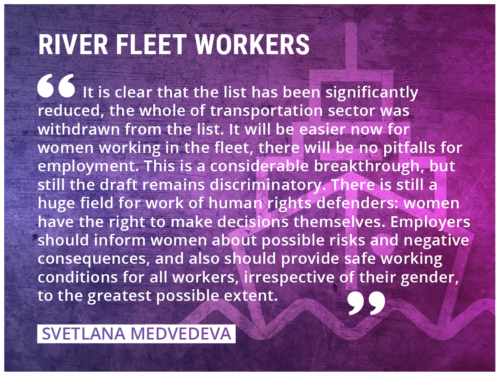 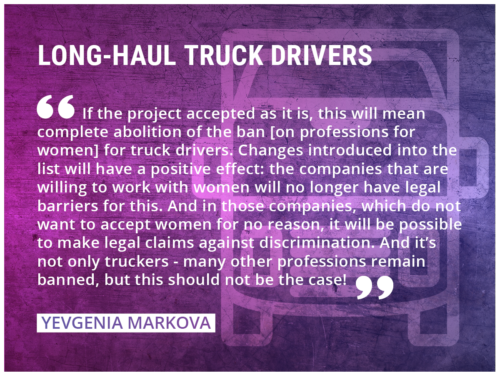 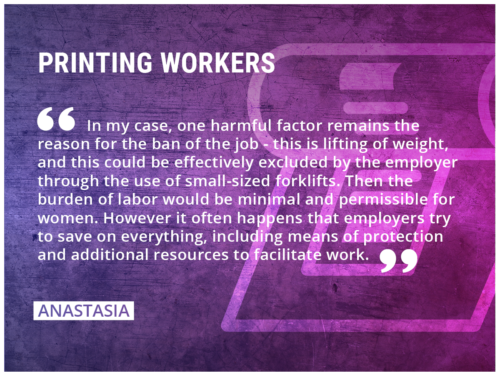 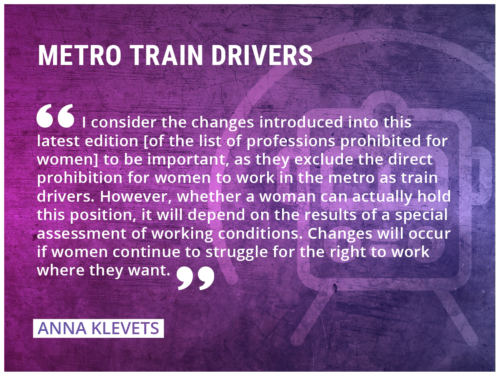 Over the last several years Anti-Discrimination Centre “Memorial” has been campaigning to abolish the lists of professions prohibited for women in all countries of Eastern Europe and Central Asia #AllJobs4AllWomen. As a result of this campaign at the end of 2017 Ukraine abolished its list of professions prohibited for women, and a few months later the Russian Ministry of Labor submitted a draft of a revised list of professions, which proposed to remove restrictions for women on a number of jobs. Persistent struggle against discrimination carried out by female professionals, who have become the heroines of the campaign launched by ADC “Memorial” with the support of trade unions, the use of legal means and communication with state and international institutions has resulted in the possibility for women to implement their right to work in the chosen professional occupations.

By initiating a review of the list of professions prohibited for women, the Russian authorities began to implement the decision of the United Nations’ Committee on the Elimination of Discrimination against Women (CEDAW) in the case of Svetlana Medvedeva and the Committee’s recommendations for compliance with the provisions of the Convention on the Elimination of All Forms of Discrimination Against Women. Lawyer Dmitry Bartenev, who defended the interests of ship navigator/helmsman/motorist Svetlana Medvedeva’s with the support of ADC “Memorial” not only has achieved international recognition of Russia’s ban for women on certain professional occupations to be discriminatory, but this decision has later been confirmed by the Supreme Court of the Russian Federation.

Although the original draft of the list of professional occupations harmful for women did not fully implement the abolition of the ban on work in a number of jobs in maritime and river fleet for women, the pressure from the Seafarers’ Union of Russia made it possible to introduce changes, which allowed women to work in the engine rooms of the vessels.

Persistent efforts to assert their right to work in the chosen profession by the main heroines of the campaign “All Jobs For All Women”, including the ship navigator Svetlana Medvedeva and long-haul truck driver Eugenia Markova, were not in vain. From now on, not only the participants of this campaign, who have persistently pursued implementation of their rights in the professional sphere, but also many other women will be able to get jobs, which were previously out of their reach, and fill the vacancies, which were previously inaccessible for women.

Abolition of direct bans for women to occupy certain jobs in the transportation sector allows women to finally work as train/locomotive drivers, drivers of public transport, intercity buses, tractors and heavy trucks. In fact, this partially solves the problem of the lack of empliyment for women, which is especially crucial for women living in remote settlements and rural areas.

The draft provides for the abolition of restrictions on the employment of women older than 49 years, which at least from this age gives women the right to claim any desired job.

Despite this women still can not fulfill themselves in some professional occupations, for example, there still exists prohibition on the use of women’s labor in extinguishing fires, and not all printing shops allow women to work there. Women, who face discrimination in the professional sphere, should resort to comprehensive methods, including legal action in order to ensure that all restrictive legal norms are abolished. Together with the right to independently decide on issues of professional fulfillment and to take full responsibility for their own health (including reproductive health), women should be provided with state guarantees for the protection of maternity.

And This is Where Art Ends

Achievements in opposing professional bans for women in 2021