On March 8, 2021, the International Women’s Day, a discussion was held under the chairmanship of Heidi Hautala, Vice-President of the European Parliament. Among the participants of the discussion were MEPs Sergey Lagodinsky and Marketa Gregorova, representatives of human rights organizations and various European bodies. Speakers included Tatsiana Khomich, a Belarusian civic activist, sister of political prisoner Maria Kalesnikava, Anastasia Shevchenko, an activist of the pro-democratic movement in Russia, the first to have been prosecuted for participation in an “undesirable” organization, and Stephania Kulaeva, head of the Anti-Discrmination Centre “Memorial”.

Tatsiana Khomich recalled that after the active participation of Belarusian women in the protests of summer/autumn 2020, many of them were prosecuted: currently there are hundreds of people on the list of political prisoners of the Belarusian human rights center “Viasna”, and dozens of them are women. At least 141 women are being currently persecuted in politically motivated criminal cases. The most famous of these women-political prisoners is Maria Kalesnikava, one of the leaders of the Belarusian movement for a democratic transition of power. Her sister Tatsiana Khomich said that she often had to find new lawyers for Maria because of the constant repressions even against the lawyers; thus, Lyudmila Kazak, the legal defender of Kalesnikava, had her lawyer’s license wothdrawn. Communication with the prisoners is also extremely difficult: letters from Tatsiana’s sister arrive with a long delay, their father had been denied a meeting for the six months of Maria’s arrest. Tatsiana Khomich urged to write letters to Belarusian political prisoners and express solidarity with the Belarusian people.

Anastasia Shevchenko spoke about her criminal case, which had involved an absurd charge of participation in the activities of an “undesirable organization”. Mrs.Shevchenko together with her children was under house arrest for 2 years despite the fact that the organization “Open Russia” itself, for the connection with which she had been persecuted, had not been recognized “undesirable” and continued to work in the Russian Federation. In 2021 she received a suspended sentence, although she had demanded a complete acquittal. During one of the first interrogations, Mrs.Shevchenko learned that her eldest daughter was dying in the hospital; the investigator did not let the mother go to her sick child for a long time. She only managed to say goodbye to her daughter, but was never able to bury her ashes.

Anastasia Shevchenko said that the number of women actively participating in politics in Russia was on the increase, as was the number of women who were under arrest for their political views: Lyubov Sobol and Kira Yarmysh of the Anti-Corruption Foundation, Lyusya Stein, a municipal deputy in Moscow, Pussy Riot’s Maria Alyokhina , Anastasia Vasilyeva, the head of “Alliance of Doctors” trade union are all currently under house arrest, and Moscow’s municipal deputy Yulia Galyamina is being prosecuted for exercising the right to peaceful assembly. Anastasia Shevchenko urged to pay special attention to supporting the activists persecuted in various regions of Russia, which are remote from the capital, where the persecution of dissenters was more terrible and less invisible. Anastasia Shevchenko urged to follow the legal cases of feminist Yulia Tsvetkova from Komsomolsk-on-Amur (she is being persecuted for alleged “pornography”, which had been supposedly detected in very ordinary body-positive pictures depicting a woman’s body), as well as Yana Drobnokhod from Novosibirsk, who had been imprisoned for peaceful solidarity actions with Khabarovsk activists.

Stephania Kulaeva of ADC Memorial spoke about the persecution in Belarus of those who not only had not participated in protests, but performed their professional duties, including the repressed human rights defenders and journalists, such as Marfa Rabkova, Ksenia Syromolot and Tatsiana Lasitsa, volunteers of the Human Rights Center “Viasna”, who had been under arrest under Article 342 of the Belarusian Criminal Code (“collective actions that grossly violate public order”). Journalists Yekaterina Andreyeva, Darya Chultsova, Yekaterina Borisevich were also sentenced to real prison terms for doing their job: they had covered the events in Minsk and other cities of Belarus in the media.

In Russia, women are also prosecuted for merely speaking out in defense of freedom of association, freedom of assembly and expression. Among the recognized political prisoners are Zarifa Sautiyeva, an Ingush public and political activist who has been under arrest for over a year and had spent half of this term in a pre-trial detention center; Yulia Galyamina and Yana Drobnokhod, who had been prosecuted under the infamous article for repeated violation or regulations on public rallies now associated with activist Ildar Dadin, the use of which the Constitutional Court of the Russian Federation had found violating the right to peaceful assembly. Five more women were placed under house arrest for an alleged “sanitary violation” (allegedly, by calling people to out and protest, they had violated the existing Covid-19 quarantine restrictions), but, in fact, for the exercise of the right to freedom of assembly. Marina Litvinovich, a member of the Public Monitoring Commission of places of deprivation of liberty in Moscow, was stripped of her mandate for expressing her support for women political prisoners. Daria Serenko, who called on women to take part in the “Chain of Solidarity” campaign, was being harassed by dangerous extremists (who call themselves “the Male state”), and this had been clearly deliberately unleashed by the authorities and doesn’t meet opposition from the latter. Women involved in professional defense of victims of domestic violence are also prosecuted: right on the eve of March 8, 2021 “Violence.net” Centre was officially entered into the register of organizations – foreign agents.

It is not only that the register of NGOs “performing the function of foreign agents” is being expanded, but Russia also introduced the list of “physical persons – foreign agents”, which features people who are persecuted only for speaking out on their personal pages in social media, among them are women, two journalists and an artist from St. Petersburg, Daria Apakhonchich.

MEP Sergei Lagodinsky began his speech with words of support for activists and human rights defenders, saying that he considered it a great honor to join the courageous women defending human rights in Russia and Belarus, and assuring Anastasia Shevchenko and Tatsiana Khomich that he was ready to continue to defend women – political prisoners. Heidi Hautala and other speakers also spoke about this. 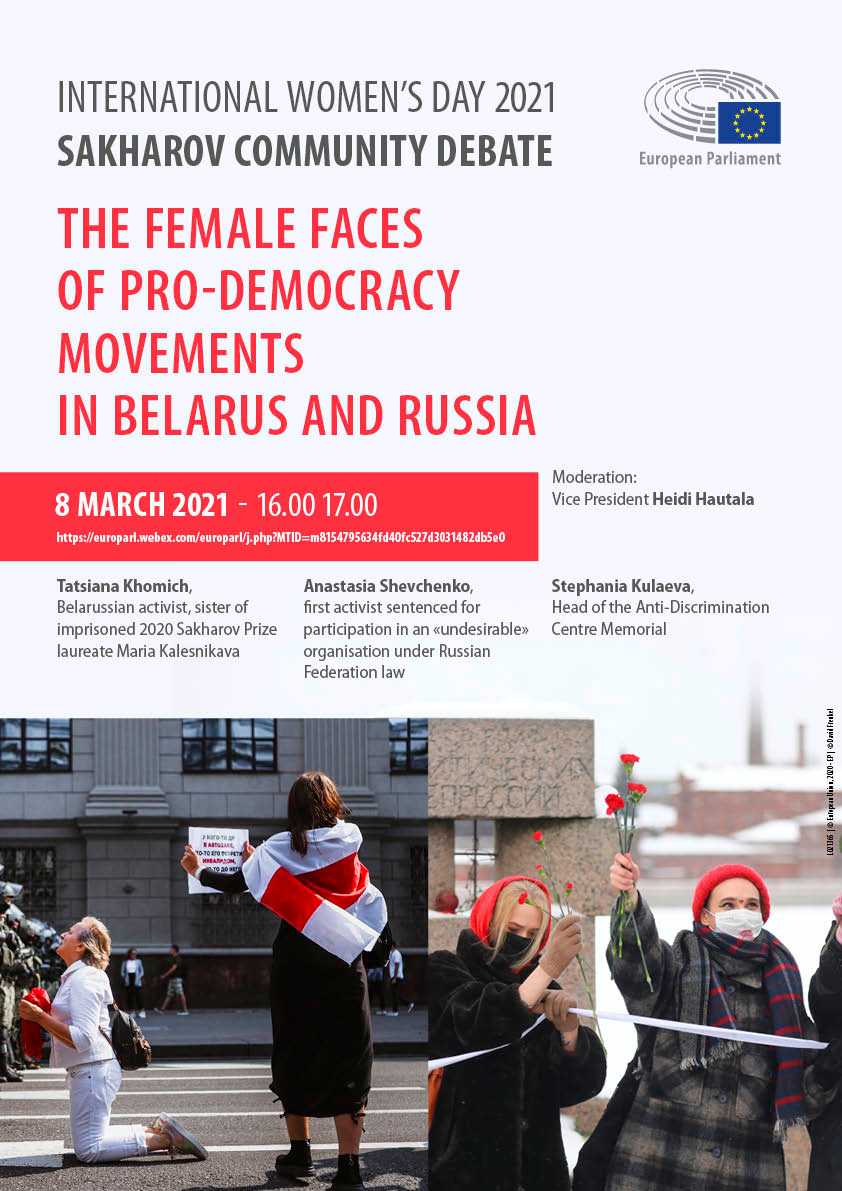 Belarussians Speak Out Against the War