Last week, draft law No. 251841-8 “On recognizing article 253 of the Labor Code of the Russian Federation as invalid” was submitted to the State Duma of the Russian Federation. It is this article – “Ensuring the protection of women’s health at certain jobs” – that establishes the infamous “list of prohibited professions”, that is, a list of industries, jobs and positions with harmful and (or) dangerous working conditions, in which the use of women’s labor is limited. The exclusion of Article 253 means the complete removal of restrictions for women on the choice of a profession and the possibility of official employment in previously “forbidden professions”. The restrictions on the use of women’s labor in jobs related to lifting and manually moving weights that exceed the maximum allowable standard for women are also removed. 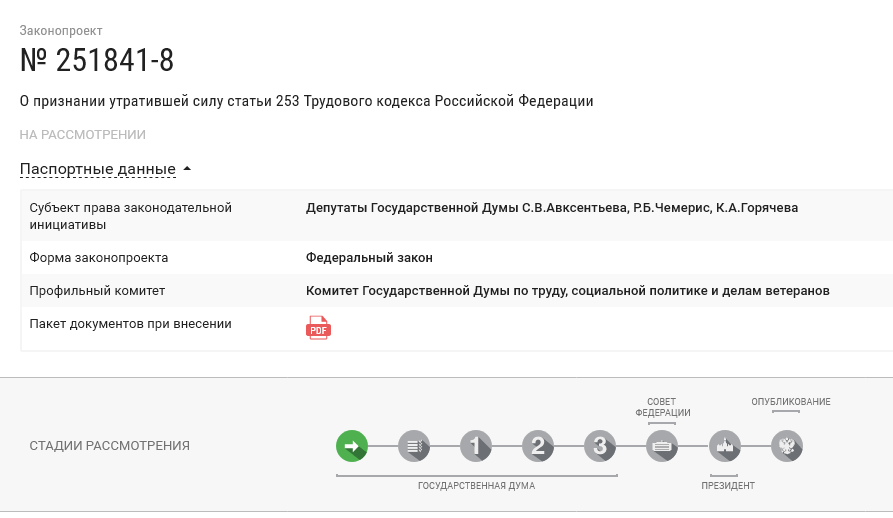 The explanatory note holds that the bill was developed “in order to eliminate the legal basis for professional and economic discrimination against women. Article 19 of the Constitution of the Russian Federation states that ‘the state guarantees the equality of rights and freedoms of man and citizen, regardless of gender,’ and also that ‘men and women have equal rights and freedoms and equal opportunities for their implementation’.”

It is also noted that the existing list of professions prohibited for women limits their ability to receive more income, which leads to lower pension payments for women in the future:

“It seems unreasonable to prohibit women from working as firefighters, machinists, stackers, divers and taking up other professions. For women, these are restrictions on the development within a profession and access to well-paid work. For men – publicly declared unequal conditions for caring for the health of citizens by the state. The list of prohibited professions is an ineffective concern for the health of women. Many of them have to work in difficult conditions in professions that are traditionally considered female. For example, the law introduces a restriction for women to lift and move loads of more than 10 kilograms. But nurses and hospital attendants move bedridden patients, who weigh much more, and are often paid much less for their work than men in jobs from the ‘list of prohibitions’.”

In March 2017, ADC Memorial launched the #allJobs4allWomen campaign, which aims to lift discriminatory bans on women in the sphere of labor. As part of the campaign, success was achieved in the judicial protection of women’s right to equal access to work: following the decision of the CEDAW, which recognized the list of prohibited professions as discriminatory, the violation of the prohibition of discrimination was also recognized by Russian courts. A gradual reduction of the list began in Russia, and it was possible to make the prohibited professions for women a topic of public discussion in the countries of the post-Soviet region, which in the case of Ukraine and Kazakhstan led to the abolition of the list of prohibited professions.